What is My Hi-Power Pistol Worth? 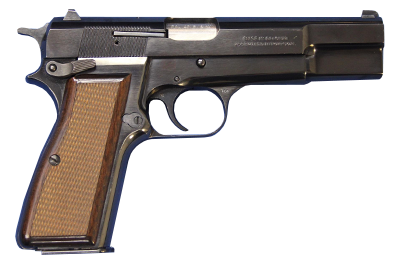 Designed by famed firearms inventor John M. Browning and Fabrique Nationale’s Dieudonné Saive, the Hi-Power is one of most successful pistol designs ever. Originally designed to meet the requirements of the French military, the Hi-Power was the first pistol to use a double stack 9mm magazine. These magazines held 13 rounds, much more than other 9mm designs of the time. Despite being rejected by France, the Hi-Power has been used by the militaries of more than 50 nations and notably were used by both the Axis and Allies during the Second World War. Production of the Hi-Power lasted 82 years with licensed producers consisting of Browning, FN and John Inglis & Co. Although production by Browning and FN has ceased, the Hi-Power is still being cloned in India and Turkey.

The length of the Hi-Power’s lifecycle has led to the production of different variants. Civilian models are Mark I, II and III. Service models include the P35 formerly used by Belgium and the L9A1 formerly used by the British. Military Surplus Hi-Powers of numerous nations such as Israel and Hungary for example can be found on the used market. During World War II when Germany occupied Belgium in 1940, they controlled production of FN plant. Hi-Powers in use by Germany were designated Pistole 640(b). These Nazi Eagle stamped Hi-Powers are rare and do well in the used market. Allied Hi-Powers were produced in Canada by Inglis.

How to Determine the Value of my Hi-Power?

A major factor in determining value for any firearm comes from the condition of the gun. If it is in mint condition with little finish wear from handling, the gun can retain a good portion of its retail value. If more usage is apparent and the gun has scuffs, dents or scratches on the slide or frame, the value will lower with each imperfection. Same goes with the metal parts, the more scratches and faded bluing finish that becomes present on the gun from handling and usage can greatly diminish its value. The takeaway is that as the condition of the firearm worsens, the less it will be worth when re-sold.

There are a number of companies that upgrade the Hi-Power to make it competitive as a modern duty pistol. Nighthawk Custom upgrades, for example, upgrade the internals and the trigger for a crisp trigger pull when compared to the stock models. Nighthawk also stipples the frame, trigger guard and slide top for better grips and ability to press check. It also refinish the firearm to be more corrosion resistant. These custom Hi-Powers are rare and a collector can expect to pay a premium price.

To see what we can offer on your Browning Hi-Power, Click here to get the process started