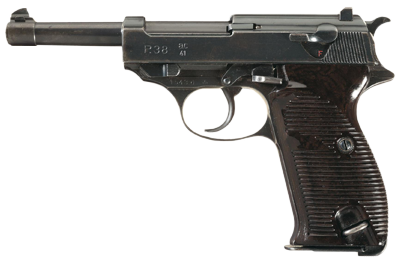 Amongst the most successful designs of handguns in the mid-20th century, the Walther P.38 served faithfully in the forces of the Wehrmacht during the Second World War and in numerous police forces post war. Operated by a short recoil, hinged locking piece assisted breechlock and featuring an open slide, the firearm was influential for the further development of firearms culminating in the Beretta 92FS. The firearm was a staple of late 20th century pop culture as the firearm has been used in numerous James Bond films, Dirty Harry and most World War II films.

The P.38 saw continued use as both a military as police pistol after the Second World War. The French company, Manurhin, produced pistols for the West German police in the 1950s. In the 1970s, an improved version of the P1, the P4 was developed for use by German state police and the South African police. Any post war P.38 such as the aforementioned examples do not net as much value on the used market as their wartime forebearers.

How to Determine the Value of my P38 Pistol?

Another factor that contributes to a re-sale value are accessories that come with the gun. Please note that as a collectors piece, the value of P.38 are greater if they retain the original finish as well as the original grips. Another nuance is whether all the parts of the firearm have the same serial numbers. Accessories that add significant value are matching magazines and holsters. German wartime firearms often have magazines and holsters that are stamped with the same serial number as found on the matching firearm.

To see what we can offer on your Walther P38, Click here to get the process started