Selling Your Gun is Easier Than You Think

Many gun owners that might have inherited a gun or was gifted one and no longer want it, end up storing a firearm that will never get used. Often times, the gun owner assumes the sale of a firearm is a lengthy and difficult process, so why bother? The internet opens opportunities for all gun owners looking to sell unwanted firearms, and no, I am not talking about Craigslist. Cash My Guns is a legitimate online business that wants to buy your guns and can do so in three easy steps from no matter where you are located in the United States. It might sound too good to be true, but the notion that selling an unwanted firearm is a lengthy process because of the legality of the transaction is false.

As a general rule, any person may sell a firearm to an unlicensed resident of the State where he resides as long as he does not know or have reasonable cause to believe the person is prohibited from receiving or possessing firearms under Federal law, according to the Bureau of Alcohol, Tobacco, Firearms and Explosives (ATF). There may be state laws that regulate interstate firearm transactions, however. A private firearm sale is straight forward, but the problem lies with a level of trust you are putting into the new gun owner. Without a background check, it is difficult to assess if the new gun owner has had a history of violence or other crimes that may not even be on a background check if they had gotten away with it. Responsible gun ownership is a wonderful thing for those who love hunting, competitive/leisure shooting, self-defense and collecting, but it is quite difficult to be 100% sure the new owner falls in this category. 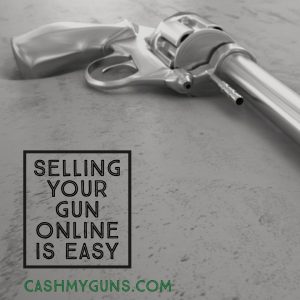 Interesting Facts About Firearms in the United States

In 2018, Austria was the top firearm importer for the United States with most guns falling into the handgun category. Looking at China’s firearm import numbers, they do not import any handguns or rifles to the US, only shotguns. The US implemented a firearms imports embargo against China in 1994, yet sporting shotguns are exempt from the embargo. Reported in May 2019, Texas more than doubles all US states in registered weapons except for Florida and California. Florida is the second leader in registered weapons with California slightly behind as the third. From 1986 to 2017, the number of manufactured guns in the US has slightly increased each year. The last reported year in 2017 hit a total of 8,327,792. The two highest peaks in number of guns between those years occurred in 2013 with a total of 10,844,792 and 2016 with a total of 11,497,441.

Best Way to Sell a Gun

From the convenience of your computer, you can visit Cash My Gun’s website, search directly for the gun you want to sell (if you do not know what gun you have there is an option for that too), and receive a free appraisal and purchase offer. We then guide you through safely shipping and packaging your firearm (we pay for all shipping and transfer costs) and once we receive your gun, we promptly send payment and official bill of sale. We are professional, safe and discreet. Cash My Guns is licensed by the Bureau of Alcohol, Tobacco, Firearms and Explosives to help people in the purchase, sale and transfer of firearms in the United States. We make this process simple, legal and safe as we feel it is extremely important to promote responsible gun ownership.

Before you let that hunting rifle you inherited from your grandfather get buried in storage, let us show you how easy it is to sell your gun online to us and receive your money quickly.