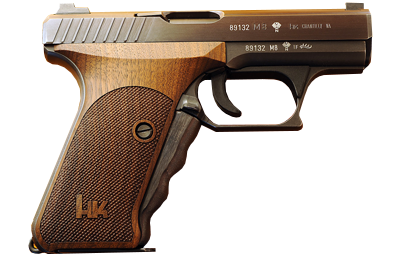 The Heckler & Koch P7 is one of the most coveted and valued pistols selling in the market. Billed as “the best combat pistol” on the market at the time, the P7 is no longer manufactured which has in turn lead its’ value to climb since its’ discontinuation in 2008. It is still used by police and militaries across the world. In the United States, these are still used by the New Jersey State Police, the Utah State Police and the United States Park Police.

The influence for the P7 was prompted by the 1972 Munich Olympics Massacre. It was revealed to the public for the first time in 1976 as the PSP (Polizei-Selbstlade-Pistole— “police self-loading pistol). Upon release, the German police decided to replace the .32 ACP Walther PP with 9mm Parabellum pistol. The P7 was required to be fully ambidextrous, safe to carry with a loaded chamber and able to be quickly drawn and ready to fire. Series production of the P7 began in 1979. Shortly after, the pistol was adopted by the German Federal Police’s counter-terrorism unit (GSG 9) and the German Army’s special forces. The P7 was produced primarily by H&K but also under license in Mexico by the Departamento de Industria Militar.

The grip of the P7 features a built-in cocking lever activated by gripping the pistol handle. The gun is unable to be fired without that grip being squeezed. It makes for a unique safety feature that is useful in covert situations.

Several other variants were built based on the P7: the P7PT8, P7M13, P7K3, P7M10, P7M8 and the P7M7, none of which remain in production. Some differences between these variants are in weight, barrel length, caliber and magazine capacity. Regardless of the variant, these pistols are still highly coveted and valuable. The P7M13 was unsuccessfully submitted to the U.S. Army as a replacement for the M1911, losing to the Beretta M9.

Some of these variants have made appearances in popular films. The P7M8 was used by both Brad Pitt and Angelina Jolie in “Mr. and Mrs. Smith.” The P7M13 was the weapon of choice for Alan Rickman in “Die Hard”, while also appearing in “Armageddon” and “Iron Man 3.”

With CashMyGuns.com, we cover, shipping, transfer fees, insurance and all other associated costs buying from customers who use our service. We work hard to analyze market trends and provide fair and honest prices to our customers using our service. Additionally, we help customers every step of the way by keeping constant communication and work hard to pay our customers in lightning speed to provide excellent customer service.

To see what we can offer on your H&K P7, Click here to get the process started.